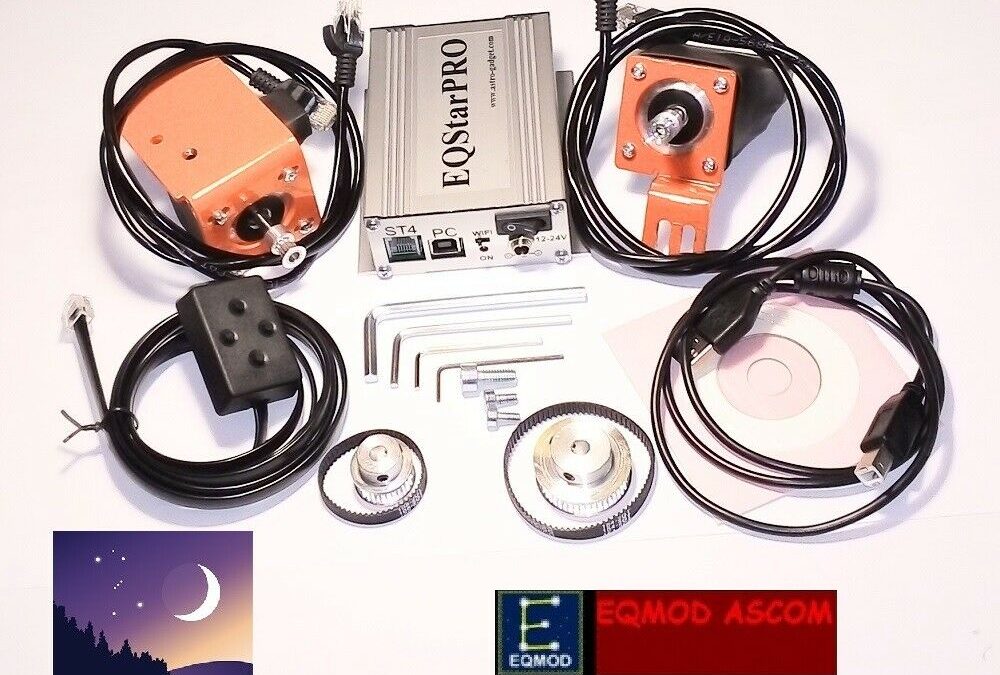 5/17/2021: Spoke with SkyWatcher and they had me make some adjustments to my mount. They do not recommend users making these adjustments unless it’s needed. If you are having weirdness with your mount please contact SkyWatcher, their support is amazing! I still need to test this adjustment and will post an update as soon as the clouds pass.

5/18/2021: Astro Gadget contacted me to let me know they would release a firmware update to resolve the issue with the DEC -76:09:13 on the mount! The update took less than 24 hours to release and after install of the firmware the equipment is working flawlessly! I am very very pleased with this response and update from Astro Gadget! I have also updated this post as well to reflect my happiness with the company!!!

Fair warning this is a long review as I walk you through the install, setup, and usage in the field. Please take your time to get a full understanding of the product and my final thoughts at the end.

So I took a gamble and pulled the trigger on the EQStarProEQM35. The reason I say gamble is I couldn’t find any really good information on this kit or a review, anywhere. There is also another company that sells a similar unit but again no reviews or response from email. So what is the EQStarProEQM35? Well, it is a full belt drive replacement kit for the Sky-Watcher EQM-35 Pro mount. What this kit does is replace your RA/DEC gearboxes with upgraded motors and belts, and replaces the SyncScan/Hand Controller Unit with its own control unit. NOTE: I am not using the Hand Controller as I have the ASIAir Pro and I am using this mount for Astrophotography. My personal images are posted on Astrobin if you want to take a gander.

The item can be ordered either online from their website https://astro-gadget.net/ or from eBay https://www.ebay.com/itm/313317507089. I opted for eBay as I reached out to the seller and received instant replies to all the questions I asked. When I say instant you have to remember there is a time difference between the USA and Ukraine. I sent an email to the main website email and never got a response? It could be an issue with Gmail as they are located in Russia so just know eBay is your best bet and you also get buyer protection. It might be a little more money but to me, it was worth it. I ordered the unit on April 16th, 2021, and it takes 5 business days for them to get the item ready as they build it all in-house. Once the item is ready to ship they use a carrier from Ukraine that then drops it off with UPS when it comes stateside. They were very good about communicating all this to me. Once UPS had the item it was delivered on May 6th, 2021. So all in all it took 2 1/2 weeks to arrive and one of those weeks was build time.

Everything arrived in a white box which was then wrapped in a bubble wrap envelope. Everything was nicely packed and secured. Here is all the parts that came in the box

Sadly the CDRom did not have anything related to instructions just a PDF about the product, drivers, and some apps for Windows and one for Android. Since I am using the ASIAir Pro the ASCOM drivers are not important to me. I was going to wait to install the unit till the new ASIAir app releases with multi-star guiding but decided to pull the trigger and install it today May 10th, 2021 as I am seeing an issue with my mount for guiding and also calibration from the ASIAir Log files which shows problems with gear backlash.

Here are my instructions and a quick breakdown of the install. It took me about 25 minutes to break down the whole mount and disassemble the motors and install the new ones and then set up my mount and gear again. NOTE: I would recommend going through the instructions once before tear down as I took better pictures of the second motor install to give you a better idea of the tension for the belts and also how to slowly put on the belt.

To use the USB cable simply connect it from the PC port on the EQStarPro and then connect it to the ASIAir pro.

First, we need to make sure to toggle on the Wi-Fi dip switch on the ESQStar Pro. When it’s working the red light will turn on. Don’t freak out when you turn on the unit and the ON light is not on, that ON light is for the Wi-Fi only. I turned on both my ASIAir Pro and then EQStarPro as the ASIAir is powering the EQStarPro

Now connect to your home network or the ASIAir Pro network. Once connected launch the ASIAir and turn on Wi-Fi Station mode and connect the EQStarPro network

I tested my stock unit in the field on 5/8-5/9/2021 and was shooting M101. If you read my previous post on how to read your ASIAir Log files you will see my DEC was no Bueno.

Even though I had a great polar alignment using my little tweak I was still having issues with my DEC and even more issues with DEC / RA after the meridian flip however this was some of the best guiding I have had with the stock setup to date due to a more dialed in polar alignment.

1h10m8s of guiding before meridian flip

31m55s of guiding before meridian flip

30m21s of guiding after meridian flip

1h28m4s of guiding after meridian flip

Field Test after install of EQStarPro

On 5/12/2021I was able to run another field test on NGC2043 with the EQStarPro. Since it’s not Saturday I can not run as long on the weekday but I did get a little data put together for a different object and did a recalibration and also guiding. As you will see my calibration is still garbage with the new EQStarPro upgrade.

When I asked Astro Gadget about the issue here is the response.

VENDOR RESPONSE: Such a calibration on the DEC axis may be due to backlash in the worm gear. Adjust and lubricate the worm gear. But in any case, the Auto Guidance will take into account the calibration results and will make corrections.

Due to this problem I opened a ticket up with SkyWatcher to work out the issue. I have a fix from them but have yet to be able to test due to clouds.

48m58s of guiding before meridian flip

47m33s of guiding before meridian flip

On 5/13/2021I opened up the ASIAir Pro application and it had a new background which means freaking UPDATE TIME!!! I ran the update and OMG the new multi-star guiding is just stupid!!!! Here is my session data from last night

DEC worm gear or no worm gear problem the multi-star guiding is clearly the silver bullet! With just a software update it’s setting this mount in the same class of those $1500-3000 except for payload capacity!

Look nothing is perfect. Also, the complexity of setting up an automated mount to run star capture and making sure all the hardware works together from different vendors (ZWO, Sky-Watcher, and Astro Gadget) is not easy, it’s just not. So with a full disclosure here is what I have found.

So bottom-line was it a good investment? Yes, with an easy 5 STARS!!! As an honest review, I was a little frustrated at first as the vendor wanted me to take the steps to keep the mount at +90:00:00 with the ASIAir Pro

However, after further discussion, Astro Gadget released a new firmware update to resolve the issues so DEC is always set at +90:00:00. These are the type of actions that I wish all companies would take! Thank you Astro Gadet for such a thoughtful product to improve my mount, and also support that knocked it out of the PARK!