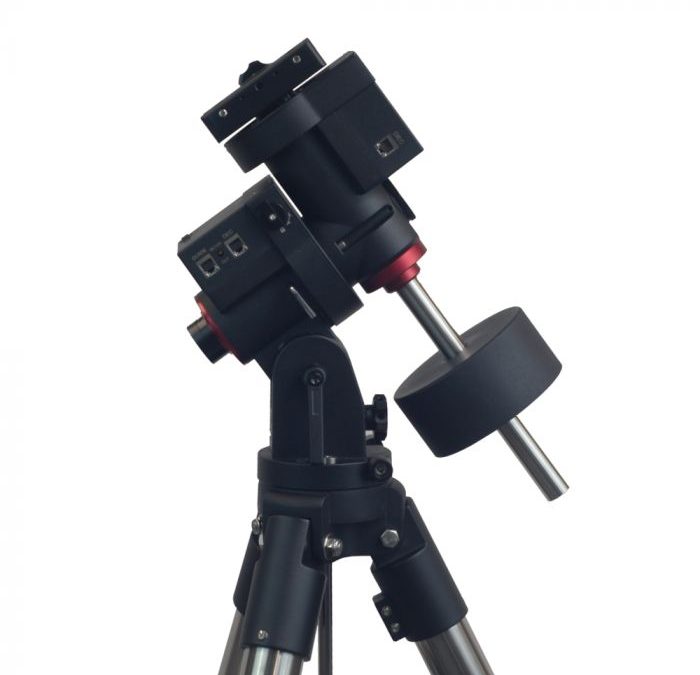 I recently pulled the trigger and upgrading my mount to the iOptron GEM28 with LiteRoc Tripod. I skipped on the iPolar and EC upgrades as I don’t need those things. However, I do plan on getting a case for it for travel when they are back in stock. Right now due to purchase demands all over the world it took over two months to come in. The main reason for the move is I wanted to handle more weight than the SkyWatcher EQM-35 Pro. There is a 6lbs increase in load capacity with the GEM28 over the EQM-35 and the GEM28 is a lot lighter by 17 pounds with all the installed weights! Also, the GEM28 comes with a quiet belt-driven motor out of the box which didn’t need an upgrade as the EQM-35 did with belts that I did.

However, with the added belt upgrade to the EQM-35, the Celestron Power Adapter I used, and the EQMMod USB cable, the EQM-35 is only cheaper by $60.71. So when it was all said and done I should have popped for the GEM28 from day one but at the time I didn’t have $1,258 laying around.

Also not that it matters to me as I drive the mount with the ASIAir but the hand controller also offers many more objects by about 169,100 than the EQM-35. Speaking of the ASIAir Pro I do appreciate the built-in WiFi that the GEM28 has out of the gate in the mount as I have been able to cut cables and also clean up my wiring as there is one less USB cable and power cable I need for the mount as the GEM28 comes with its own power supply and single output 12v power that plugs into the ASIAir Pro so I can power it up. Here is an image breakdown of the mounts all setup. As you can see the GEM28 has a much cleaner cable management than the EQM-35 did.

The big change is there is a very small cable that connects from the base of the GEM28 Mount to the DEC motor. With the EQM-35 there are two cables from the controller unit that goes to the DEC and RA Motor. Also because the GEM28 uses WiFi I don’t need to keep the ASIAir Pro next to the EQM control unit so I was able to move the ASIAir Pro to the top with the RedCat.

Since both units are using stepper motors but still have worm gears we can see the difference in the backlash as well. As you can see the EQM-35 has more DEC correction than the GEM28 does but both do still have correction points regardless.

Guiding is one of the main reasons I purchased the GEM28. I have seen amazing posts on Cloudy Nights showing how good this mount can guide. While I did start off with a hiccup on my first night I was able to correct some settings in my ASIAir Pro and get a better balance with DEC and RA and I am very pleased with the outcome now.

As you can see both totals are within spec and are within at least 1.27 arc second or less. I was never able to retest the mount but I reconfigured the mount to bring the weight under the scope to help with balancing and it looks much cleaner and also got rid of the stupid ST4 Cable which is NOT needed!!!! I have been using that since day one and never needed it (facepalm)

When it’s all said and done the only reason I like the GEM over the SkyWatcher is it’s lighter, has WiFi, and requires fewer cables. You are paying for the upgrades of course so if I had to do it all over again I would still have gone with the SkyWatcher before the GEM. They are both great mounts but as I suspected the SkyWatcher still has a place for beginners even though it’s not loved by most of the Astro community as it is a lower end mount. However, that is the reason I bought it because it was cheaper and still performed very well for me!