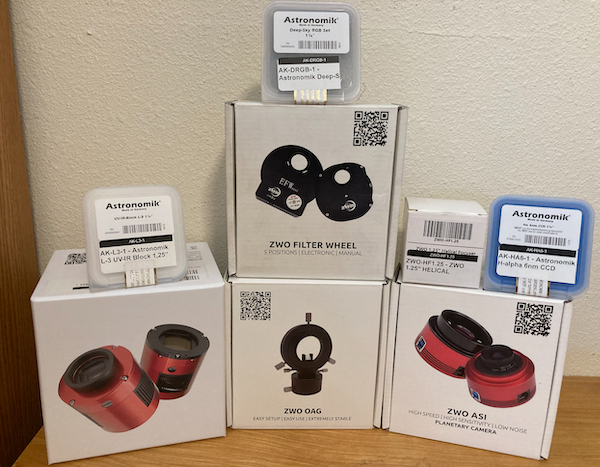 So I have been contemplating what I want to do with the stars and my rig. I moved from a Nikon D5500 to the ZWO ASI533MC Pro. I took great pictures with them both but even better pictures with the ZWO ASI533MC Pro. One of the things that added a bunch of fun to the setup was an Optolong L-eXtreme Dual-band Pro filter. It allowed me to capture both OIII (Oxygen) and Ha (Hydrogen Alpha) from the skies above. What my initial plan was to use the L-eXtreme filter with an SII filter and be able to capture SHO images. However, the downside with OSC (One-Shot Color) cameras is they have a Bayer filter as shown below.

Because OSC has the Bayer filter you are not capturing just one color you are capturing a full range of colors and…I digress and will let Dylan O’Donnell explain and maybe make you laugh too!

So what does this all do for me? Well, now that I have upgraded to a new Monochrome I can take a full image with a filter and capture 100% of the image with that said filter. This will greatly improve the detail of my images, and also the colors as well. What it does do is adds a little more time to processing in PixInsight but it also allows me to mix and match colors anyway I see fit be it SHO, HOO, LRGBHa, and the list goes on. Since I was low on funds when ordered I opted for a used, and smaller Electronic Filter Wheel to save some bucks. Once I get some more funds I will upgrade to an 8×1.25 EFW and also add my SII (Sulfur) and OIII (Oxygen) filters and probably a dark filter for slot 8 but still contemplating that one as I can just cover the telescope with the cap.

The other thing this upgrade does for me is allowing me to have a better focus on my stars for guiding as I added the Off-Axis Guider (OAG) and Helix Focuser for pinpoint accurate stars! The other benefit is I dropped a little weight from the removal of the guide scope and the RedCat handlebar which held my old guide scope. I may still use that at a later time but for now, it’s off the mount. Also, I upgraded from the ASI120MM Mini to the ASI290MM Mini CMOS Telescope Guide Camera which is supposed to also improve guiding as it’s a more sensitive camera. While my guiding has been rocking since I started really dialing in my Polar Alignment with this little tweak. I am still looking to improve it more with the OAG and Helix Focuser

I will be posting more in the coming days and also include a YouTube video for a full walk-through. Right now based on early testing my guiding has vastly improved with the current version of the ASIAir Pro 1.5.3 software. I am waiting for the release of the 1.6 version with multi-star guiding and also planned sequences so I can image multiple targets at night.

What you will see is before the upgrade I had a good alignment but an even better alignment after the upgrade. However, you will also notice that my Polar Alignment Error was higher with the newer equipment. Based on my 0.80 RMS score for that guiding session I am seeing a 60% increase in better guiding! There is a lot that affects guiding such as the quality of the sky, focus on the stars, quality mount, etc.

However since I don’t have the quality of the sky from the first session and was able to capture some solid stars I can only take into account the difference in the camera I am using for guiding, and the Off-Axis Guider and Helix Focuser. I would like to do a stare and comparison of the difference in my star focus in the ASIAir application. Sadly, that is not a fair comparison as the last time I had a screenshot was on M42 the Orion Nebula, and as it stands Orion is too low on the horizon and I can’t see it from my backyard due to my neighbor’s trees.

Regardless I plan on capturing more data points and explain more of this in detail when I do an in-depth review of the EQStarProEQM35 belt upgrade kit I purchased for my mount which recently arrived. Just from my initial gathering of data I am seeing some serious issues with the EQM-35 Pro stock Declination gears and can see I am having some serious backlash with those gears even though I am getting some amazing guiding