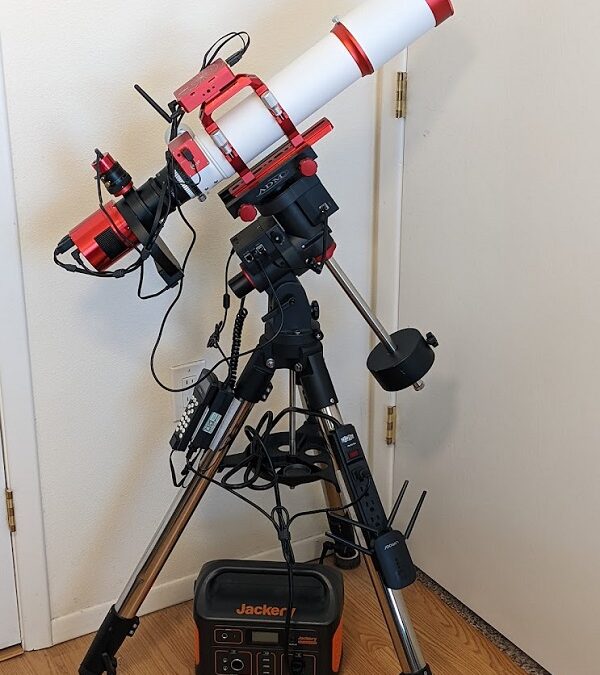 Since I sent back what was supposed to be my forever scope I ended up pulling the trigger on the bigger brother to my Z61II and ordered the Z81 from Agena Astro. It arrived on May the 4th be with you. What I should know by now after dealing with the same issue with the Z61II is that William Optics likes to sell their Field Flatteners with a 0.8x Reducers built-in to the flattener. For whatever reason, I ordered the Z81 with the Adjustable Field Flattener 6AIII. The field flattener reduces the image by 0.8x which means my 559mm Focal Length is now 452mm based on the ASIAir Plus software, which is not what I wanted…

So I ended up also ordering the Orion Field Flattener to flatten my stars but not reduce them so I can enjoy the full focal length of the Z81 well almost per ASIAir Plus I am getting 556mm. Sadly I have not been able to test the telescope or the Orion Field Flattener as quickly as I wanted. The first time out I had the WO Flattener installed and it was windy so it was a bust. After the Orion Flattener arrived I was ready to test and somehow I lost my 3-meter 5v cable so I couldn’t power the mount at all (really guy???). Luckily two new cables arrived today May 26th from Amazon which is almost a month since I ordered the scope. Also lucky for me I am off on PTO so I will be heading to the GNTO to see what the Z81 can do!

First Impression of the Z81

So what I purchased out the gate was the Z81 the Flat6AIII Field Flattener / 0.8x Reducer which comes with a nice case and I also added the William Optics Rotator as the scope doesn’t offer that built-in.

This setup was almost perfect however the Field Flattener/Reducer is not what I should have ordered and the WO Rotator is shoddy in terms of build quality. It has little screws all around the rotator (left image) to tighten down but if the screws are too tight you can not rotate your camera. Also if you don’t tighten it enough it could create some tilt in the camera so based on what I saw with it connected to the telescope I can not recommend using it, especially in the dark as you need to tighten the screws.

The true downside is you need a Rotator on the scope and or your camera for Astrophotography so you can frame objects properly based on where they are located in the sky. I am not sure it would be ideal for most imagers and I think WO should have just included the rotator into the scope as they did with the Z61II model which is high quality (middle image). However, with the Orion Flattener (right image), you do not need the WO Rotator as you can use the stock 2″ adapter and it has three nice large thumbscrews for adjustments that can be done in the dark and they have an internal plate that does not scratch the Orion Flattener.

So for basically an $878.00 telescope minus the flattener/reducer and rotator you are left with a solid scope. The build quality is really nice and it’s solid for sure but also very light at 7.7lbs which I really like. Since it’s super light I only need to lug around a single 10lb counterweight for both the Z61 and the Z81 depending on which one I want to use with the iOptron GEM28. Another thing I really like about the Z81 is William Optics included a top screw to lock the dew shield in place so it doesn’t slide around while you capture images. The ASKAR 400 which I was also looking to potentially purchase doesn’t offer that which is a poor design in my opinion and is why I passed on the ASKAR.

Moving on, the dovetail is a small little guy but it fits perfectly fine on the iOptron GEM28 with the upgraded ADM Dual Saddle bar I purchased so I am not complaining at all as it balances just fine and doesn’t run into the focuser. However, the smaller dovetail could be a turn-off for some users. *Note the scope is not sitting flush as the ASI Filter Wheel pushes it up.

One thing I like about the Z81 is attention to detail and William Optics took care of this by adding a nice screw-on case for the focuser knob (not offered on the Z61II) so it won’t ever get dirty in the event I use the scope for observing and not Astrophotography. Also in the same picture, you can see the nice screws they used to keep the scope tightened in the main housing bracket which is easy to loosen and tighten.

Moving to the top of the telescope we have the saddle bar which was designed for the ZWO ASIAir Plus to sit perfectly on the scope! I know, I know it wasn’t designed exactly for the ASIAir Plus but hey it fits up there perfectly and doesn’t throw off the balance of the scope so yeah it’s perfectly designed lol.

Now we move the Telescope cover like all William Optics scopes they have a built-in Bahtinov Mask so you can get pinpoint focused stars. Since I use the ZWO EAF (Electronic Auto Focus) I don’t really need it but it’s nice to have. The only complaint I have about the cover is it was really loose and kept falling off the scope so I had to add a little piece of double-sided tape to keep it in place but only removed one side of the tape

So with that how does it look when you take pictures with it? Here are some examples I took from 5/26 – 5/27 doing Broadband and Narrowband.