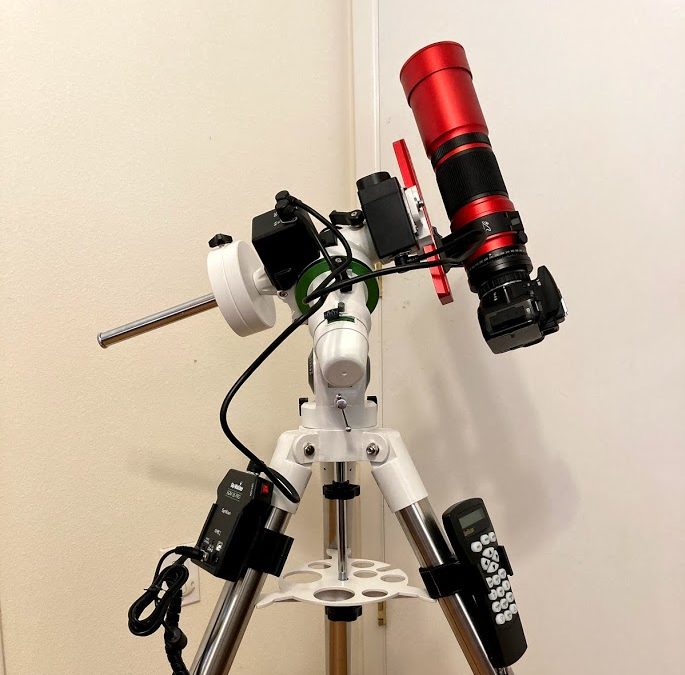 One word to describe the Sky-Watcher EQM-35 “Amazing”. Yes, the EQM-35 is downright an amazing mount and I wish I never spent the money or the frustration going down the rabbit hole of the iOptron SkyGuider Pro. I am not going to say the iOptron is a bad mount it’s not just the best quality in my humble opinion and I think once you add a solid tripod, the William Optics Vixen bar, and extender you could have saved all your money and bought an EQM-35 and had enough left over for a guide scope. It’s not as light and easy to move around as the SkyGuider Pro and it requires a power source but the EQM-35 wins in spades and it’s not even a close race.

On day one, I didn’t even really read the manual just flipped through the pictures to make sure I put it together properly. I also didn’t even read the SynScan manual at all I just watched the following YouTube videos to give me a quick breakdown of how to polar align and do a single star align and I was off to the races.

Day One Problems at Night

Now to say this process was perfect would be a lie, let me break down my problems

So even with the issues, I had last night, I was still able to shoot the stars and I was rocking 40-second exposure subs! I shot the M11 – Wild Duck Cluster, IC 1848 – Soul Nebula, M1 – Crab Nebula, and finally M33 – Pin Wheel Galaxy. Sadly by 1 AM in the morning my camera died so I didn’t get to finish M1 or M33. That is what I get for not charging my battier’s…a rookie mistake but it happens.

So this morning when I woke up I had to some free time to work on the Mount and fix my issues and charge my camera batteries lol!

I next downloaded the SynScan firmware update from http://www.skywatcher.com/download/software/synscan-v4-hand-controller-firmware/ and updated the firmware to 4.39.15 from 3.39.03. I watched the following video which helped as I didn’t know you had to turn off the base unit, hold down 0 and 8 at the same time and turn on the power to get to download mode. Make sure the USB is not connected as it seemed to power the hand unit. Once it booted to the firmware mode I ran the update and unchecked auto port and set to COM3 and browsed to the file and was updated in 2 minutes. Once the update completed I shut off and then tested the star alignment and I was able to use the toggle buttons to move the mount and fine-tune the mount which solved my issue!!

I am excited to take it out again tonight and finish up on M33 – Pinwheel Galaxy. Here are one of my pictures I took last night. Enjoy!